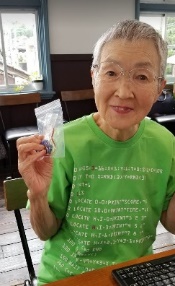 She is the member of the board of the Broadband School Association.(NPO)

She learned computer skills by herself at the age of 60, after she retired from the Megabank. While nursing her mother at home, she explored into the world of computer and internet. In 1999, she co-founded the “Mellow Club” where she has been serving as a vice president. She has been dedicated to the promotion of digital technology and devices among senior citizens ans also she is on the edge of the advanced technology user at home in the later life.

She has a computer learning class at home twice a week for neighbors age over 60. And she has been created the unique text books to study PC “Excel Art” for the older adults.

Excel Art is her idea to study Microsoft Excel. She presented her PC Life at the TEDx Tokyo 2014 and received the great reputation.

TED Tokyo 2014 Now it is time to get your own wings.
https://youtu.be/3aP3IZbefkw

In fall 2016, she developed an iPhone app, and released “Hinadan” in February 2017 for “The 20th Digital Hina Matsuri (Festival)”, an online event hosted by the Broadband School Association.
Apple corporation invited her their WWDC as a special guest.
The app was featured by NHK, CNN and other major media organizations internationally. She is the oldest member on the advisory board of “the One-Hundred-Year-Life Generation Strategic Committee” which produces action plans for “the Talent Development Revolution”, part of the Abe administration’s political platform.

In February 2018, she presented at the United Nations Commission for Social Development on “Why are Digital Skills Critical for Older Persons?”.

On June 1st 2018, she received the Internal Affairs and Communications Minister Award on Radio Waves Day. 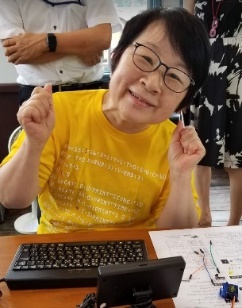 Inspired by her own experience of nursing for her parents, she realized the benefits of ICT. She hosts workshops and group training sessions, called ‘smartphone salon’ for senior citizens in Yokohama and Sendai City who have difficulty using them. She is also a Senior Information Life Adviser and Information Security Supporter at SPREAD – Security Response Council Institute. 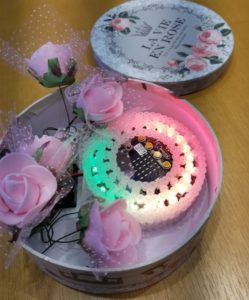 Since July 2018, she has supported the smartphone Kakekomidera (“smartphone refuge”), and coding workshops for children.
She created beautiful Digital Birthday Cake with micro:bit and iron beads.

Born in September 1953, she lives in Midori ward, Yokohama.
She is grandmother of a 4 and a 1 year olds.